Nestled in the shadow of the eastern slopes of Table Mountain lies one of the most popular and peaceful places for nature lovers in Cape Town – Kirstenbosch National Botanical Gardens. Kirstenbosch is world-renowned for the role it plays in the conservation of the endangered and endemic plant species of Southern Africa, most notably the plants of the fynbos biome.

The offices for the South African National Biodiversity Institute (SANBI), which has a strong focus on conserving rare plants and habitats in South Africa, are situated here too. Many people visit the Gardens to just walk through the forested areas or have a picnic on the wide lawns.

Aside from the botanical wonders, a range of animal species can also be observed in Kirstenbosch. From the time when I first picked up a camera, it has been the birds that live in the Gardens that have constantly drawn me to this magical place (it’s one of the best places to go bird-watching around Cape Town!). The rich variety of plants and available habitat and food in such a small area has led to Kirstenbosch being a hotspot for birds on the Cape Peninsula. Many of them are quite habituated to humans too, which has led to me having some incredible close encounters! 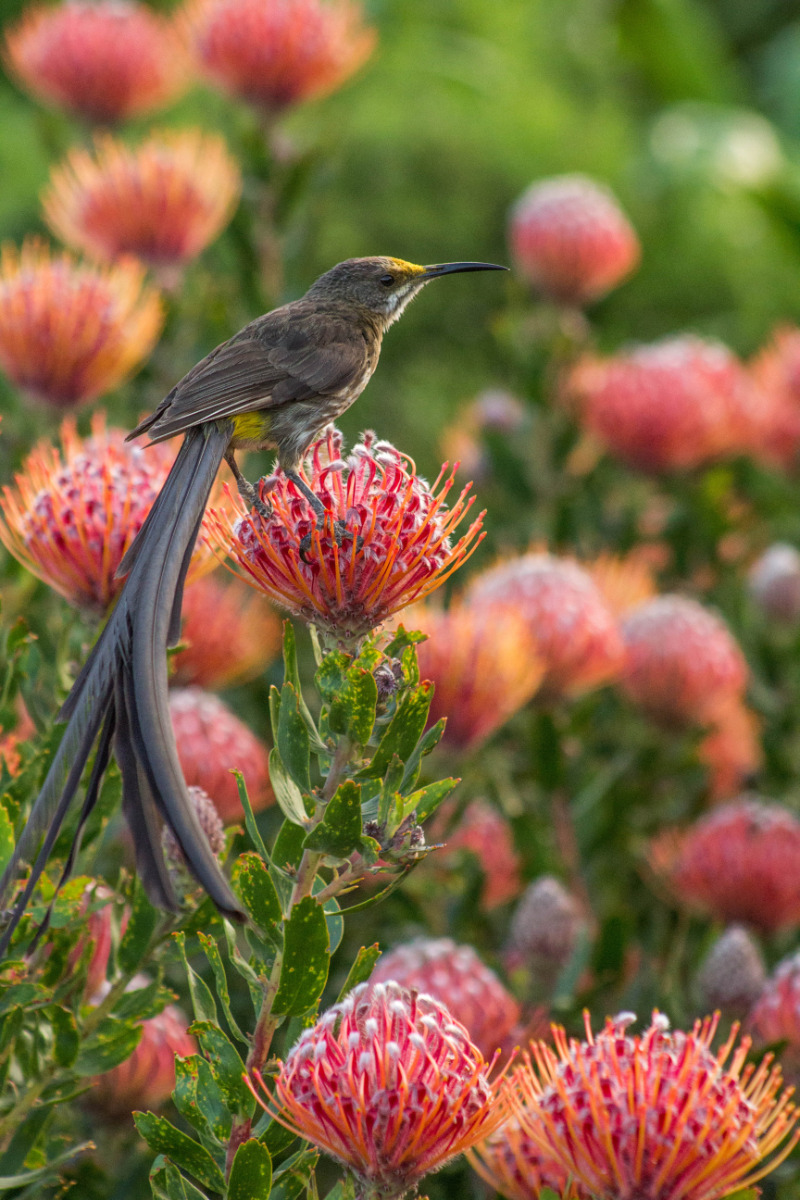 Tickets: You can buy tickets at the entrance, or buy them online (I recommend buying online if you’re going on a summer weekend, otherwise you may be standing in a queue for a while)

Dogs: Dogs are not allowed in most parts of the park – you can check out SANBIs garden rules (including a dog map) here 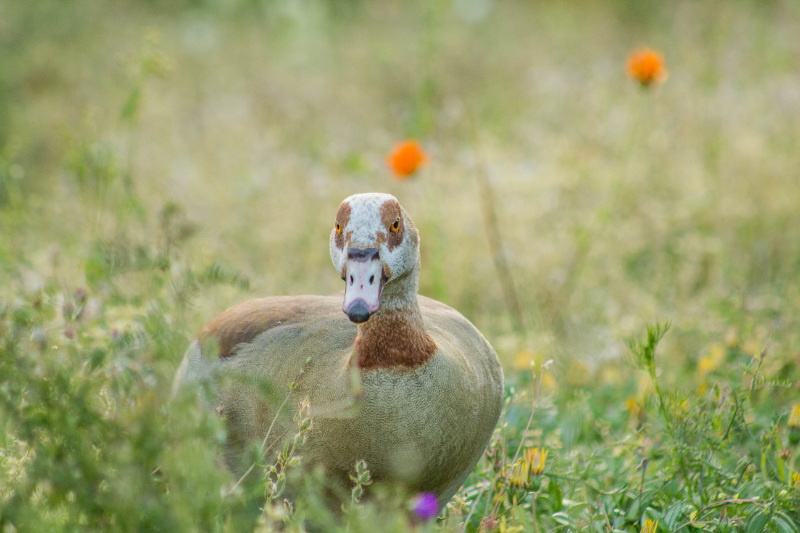 The lower sections of the Gardens are the most popular with tourists due to the massive lawns and rocky streams right next to the entrance gates. The two main gates are located here, with Gate 1 at the bottom of the Garden, where shops and a large greenhouse are located, and Gate 2 slightly further up on the eastern side of the garden. There is a Tea Room by this gate that I have been to eat at many times after walking around the Garden, and can highly recommend! Both gates lead out onto wide lawns fringed by flower beds.

This area of lawns is bisected by the Nursery Stream, which varies from being a raging torrent after winter rains and a tranquil trickle in the summer. The green lawns, hidden stream and massive trees that line the stream make this probably the most popular part of the Garden for families.

Between October and January, there are also concerts in the Gardens on the sloping lawn just above this area that are very popular among residents. Artists such as Johnny Clegg, Jeremy Loops, Freshly Ground and Texas have all performed here. 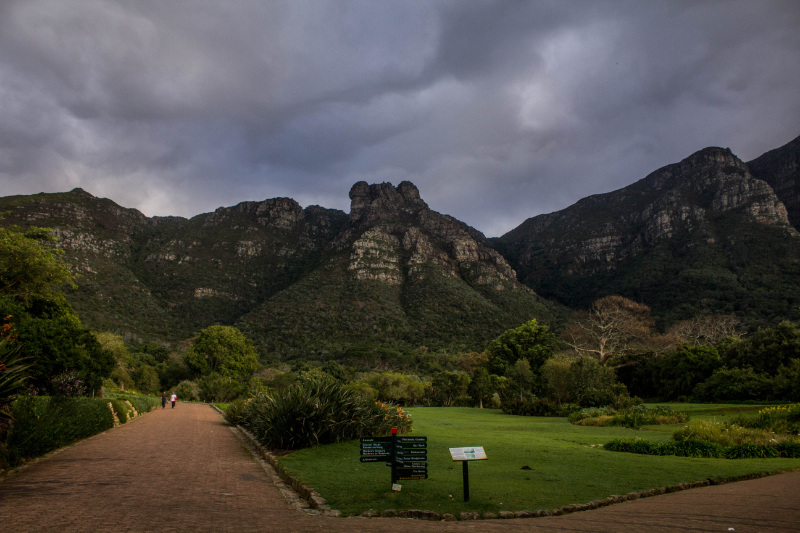 In spring, the beds near the entrance to gate 1 come alive with the bright flowers of various daisies and vygies, which represents in a microcosm what happens on a large scale in the West Coast National Park and Darling. But there are also impressive flower displays here in the winter months, when the aloes and red hot pokers produce their brilliant orange and red flowers.

For bird watchers, these flowers are a magnet for southern double-collared sunbirds and the brilliant malachite sunbirds. Cape bulbuls, speckled mousebirds and Cape robin-chats are also frequent visitors to these flower beds. The nearby pond regularly plays host to families if Egyptian geese and the reedbeds are used as hiding places by levaillant’s cisticola, little rush warbler and flocks of common waxbills and bronze mannikins. 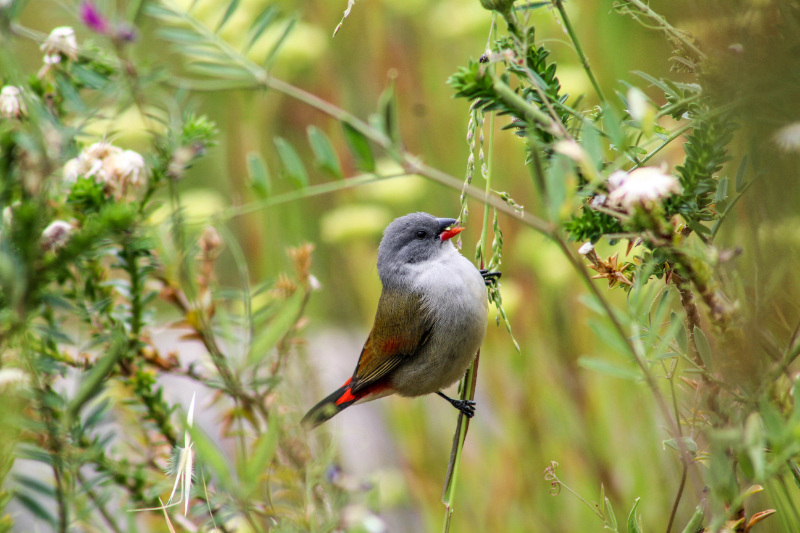 There is also a pair of spotted eagle-owls that use the hanging pot plants by Gate 1 as nests in some years to raise their chicks. It can be quite a shock to enter the gardens and see several pairs of yellow eyes glaring at you from a pot plant!

The Dell is located just above the Otter Pond and is dominated by towering yellowwood trees and an ancient fig tree. Beds of Clivias and Streptocarpus thrive in the shade of these giants, providing a brilliant display of colour once they flower. A beautiful stream flows through the Dell, fringed by emerald ferns and impressive tree ferns and echoing with the calls of Cape River Frogs. It begins at the Colonel’s Bird Bath, which is a bird-shaped pool that was built in 1811 to collect water from four natural springs that come from the Table Mountain Aquifer (under the mountains).

While the bath was built in the 1800s, hand axes and other stone tools have been found by archaeologists in the springs, indicating that this water source was used for thousands of years! Just above the Bath, several species of cycad dominate the beds, including one particular individual that is the last of its kind (a reminder of the threats that these plants face). 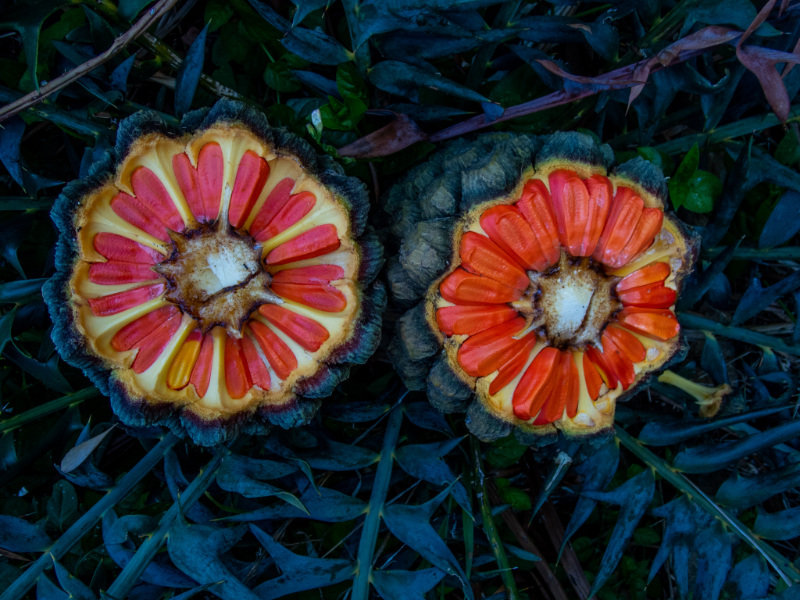 The Enchanted Forest lies just above the Dell to the left (facing the mountain) — this forest has become a big drawcard for people visiting Kirstenbosch since the construction of the Boomslang Tree Canopy Walkway. This canopy walkway takes you up to the level of the tall emergent trees in this forest and offers a spectacular view of the Gardens and the surrounding suburbs and mountains.

Information boards along the walkway give visitors an idea of the ecology of these forests. The range that dominate them include many of the species found across the Western Cape, including Cape Saffron, Yellowwoods, Candlewood, Cape Beech, Wild Plum and Wild Olive.  For birdwatchers, these forests are a great place to look for elusive species like lemon doves and olive woodpeckers.

Cape batis and paradise flycatchers often build their nests here while African olive pigeons and sombre greenbuls travel between the fruiting trees. The resident spotted eagle owls can often be found roosting near the Boomslang too, along with other raptors like African goshawk, African harrier-hawk and black sparrowhawk. On one occasion, I spotted an actual boomslang in the trees close to the start of the Boomslang! 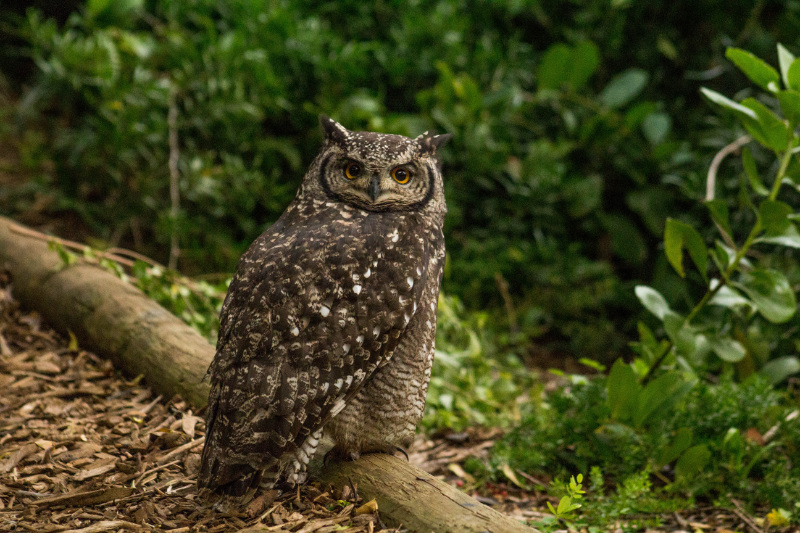 The upper sections of the Garden are dominated by beds of fynbos. Various species of Proteas, Ericas and other species flower at different times of the year but there is always something to be seen here. In the first months of the year, the Erica beds come alive with brilliant shades of pink from the whorl and ninepin heaths. In spring, pincushion proteas burst with bright yellows, oranges and reds along with the subtle pinks of the sugarbushes.

The King Proteas tend to flower in February and March and the endangered Marsh Rose in June and July. During the winter months, a variety of mushrooms and other fungi can also be found in amongst the fynbos beds, including the bizarre birds nest mushroom. 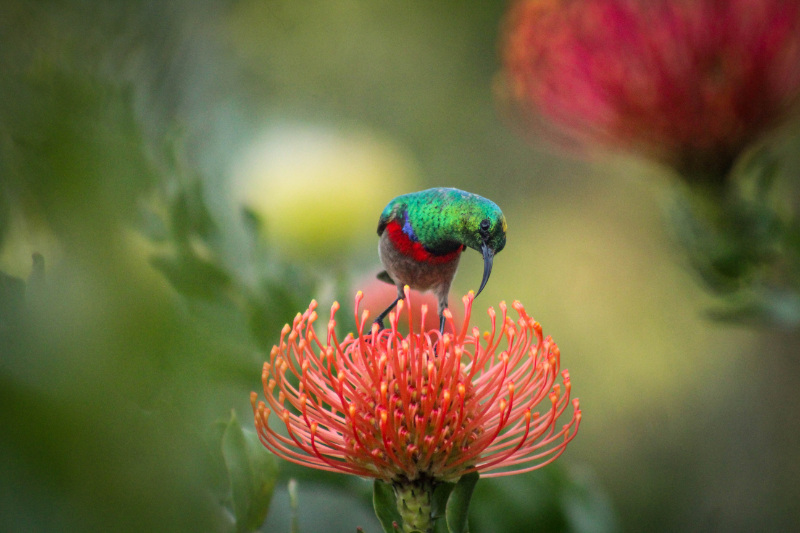 Hiking from the Fynbos Gardens

The Gardens are situated on the edge of the Table Mountain National Park with its natural areas of fynbos and forest. The fynbos garden provides visitors with easy access to the many hiking trails that run along and up the mountain. These include popular hikes like Skeleton Gorge and Nursery Ravine, as well as several contour paths that offer easier hiking. These trails take people through dense natural fynbos and moss-covered forests that conceal a number of waterfalls which can be quite spectacular in the winter months.

Animal spotting in the Garden

This part of the Garden really is alive with animals. The sandstone rocks provide homes for rock agama and crag lizards, while angulate tortoises search for food deep in the flowerbed. Striped mice race between the flowerbeds and Cape Mongooses occasionally come out into the open. If you are very lucky, you may even spot a Cape genet or even a caracal searching for prey in the early morning or evening. 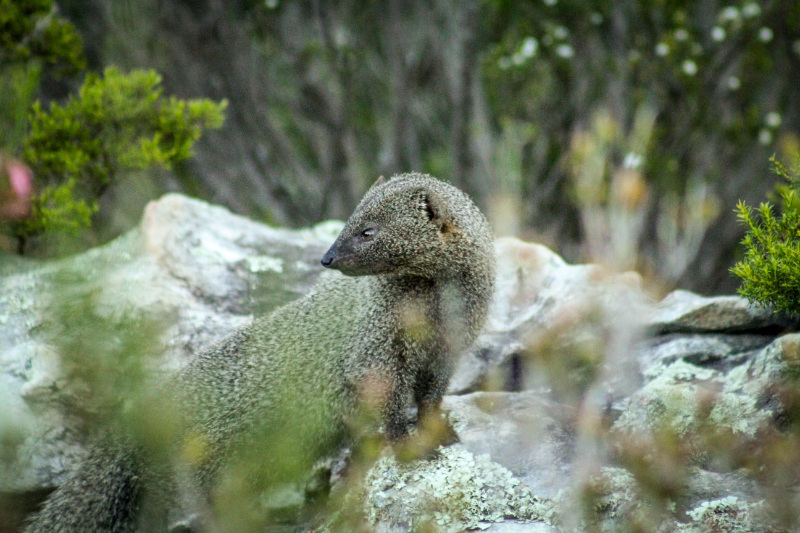 But the real stars of the show in the fynbos garden have to be the birds. The vibrant Erica species are the favourite, but by no means the only, food source for the spectacular orange-breasted sunbird, one of my favourite to encounter in the gardens. In the middle of the year, these birds disappear largely into the mountains to nest, but in the first few months of the year, when the ericas are in full bloom, and from August/September when most of the pincushions start to flower, they arrive in force, often chasing off the smaller double-collared sunbirds away from their preferred spots.

The pincushion flowering season also draws in the equally extravagant malachite sunbirds, and occasionally amethyst sunbirds put in an appearance. But the one bird that is always present here is the Cape sugarbird. While they are a bit drab in comparison to the sunbirds, the flamboyant tails of the males, their bizarre calls and their comical expressions make them just as spectacular and they dominate the pincushion and sugarbushes that they prefer to visit.

A number of other birds also live here alongside these nectar feeders. Southern boubous patrol the flower beds in search of insects, geckos and nestlings, their melodic calls echoing across the fynbos gardens. Brimstone and forest canaries feed on flower seeds while rock kestrels hunt overhead. Families of Cape spurfowl search for food on the lawns, often alongside visitors enjoying a picnic. 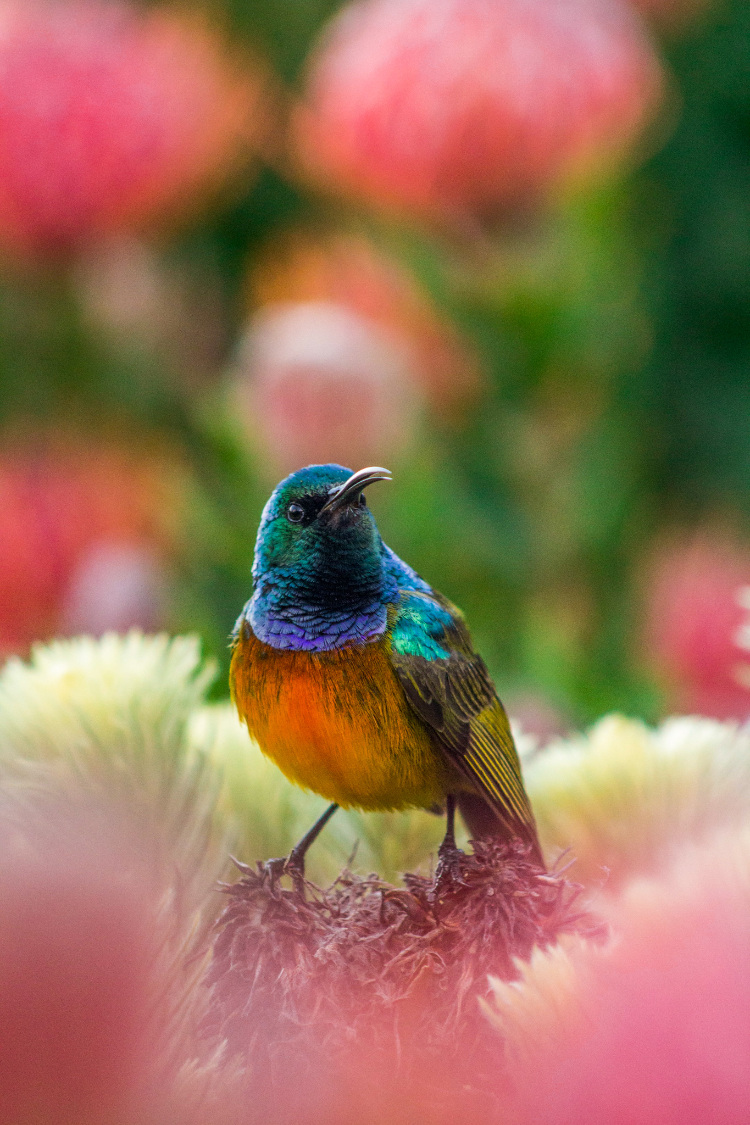 For me, visiting Kirstenbosch has got to be one of the most special things about living in Cape Town. I’ve lost count of the number of times I’ve visited this place, but I know I will never get tired of going. There is always something new to see here.

Whether you go to look at the flowering sugarbushes and the sunbirds that visit them, or if you want to search for lemon doves in the Enchanted Forest or just enjoy a picnic with your family, Kirstenbosch really has something to offer every person who walks through its gates. 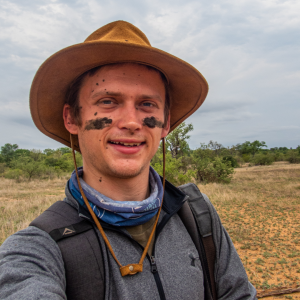 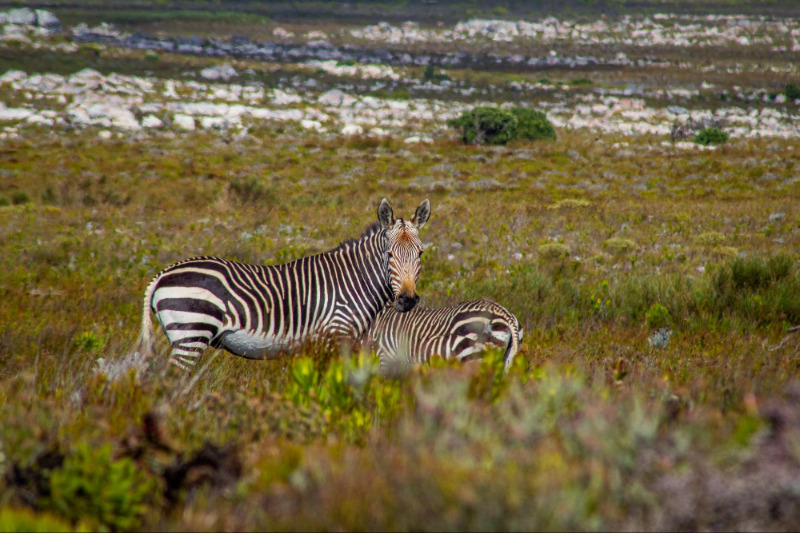 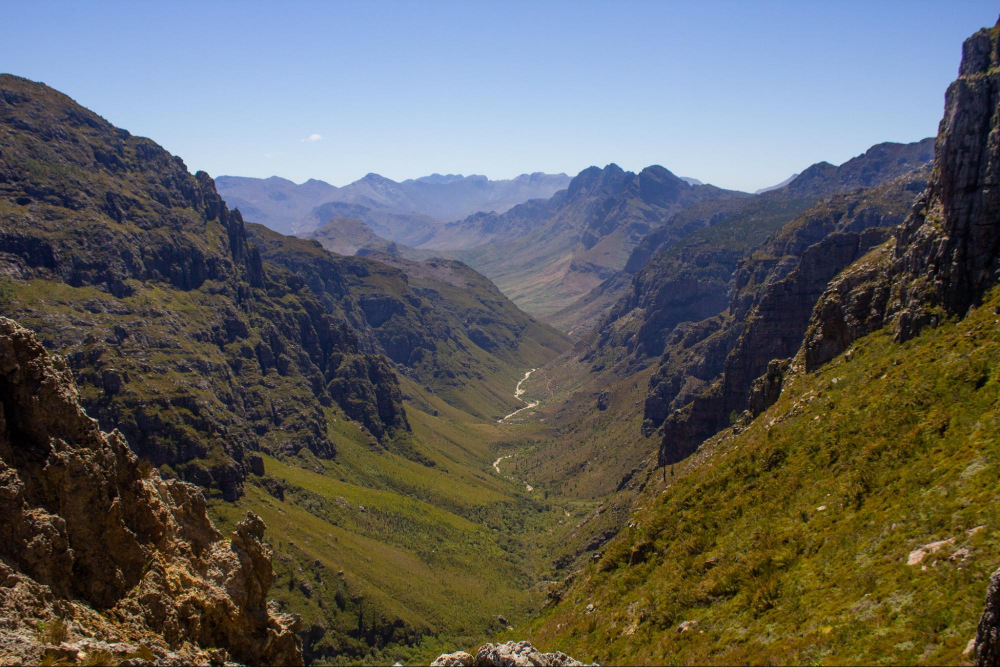 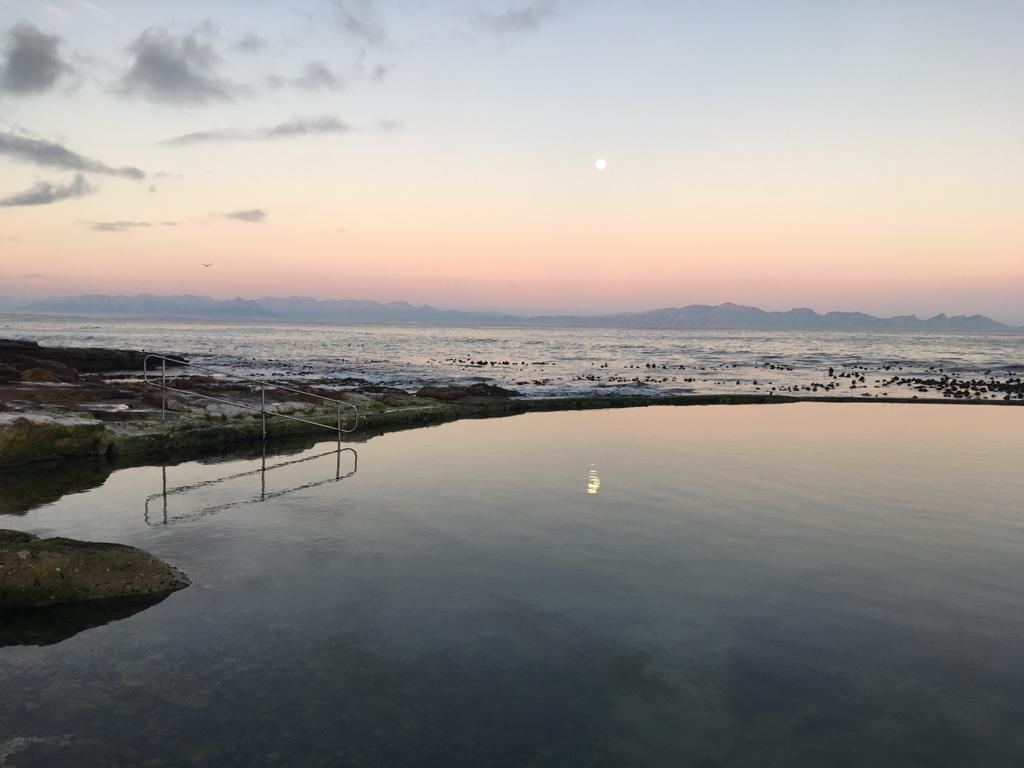